This easy vegan Tom Kha soup is a sweet, sour, and spicy Thai soup packed with herbs and spices in a rich and creamy broth. Tom Kha is simply Tom Yum soup with coconut milk added to it to mellow out the spiciness and gives it a creamy full flavor! Serve on the side of your favorite Thai dish or over rice noodles and make it a meal.

Refrigerate: Vegan Tom Kha soup will keep well in the fridge for 3 - 5 days in a sealed container.

Freeze: Tom Kha freezes well and can be stored in an airtight bag in the freezer for up to 3 months.

Reheating: Reheat the soup in the microwave for about 3 minutes or reheat it in a saucepan until warm. 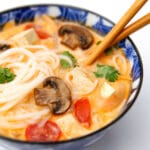 We are a participant in the Amazon Services LLC Associates Program, an affiliate advertising program designed to provide a means for us to earn fees by linking to Amazon.com and affiliated sites. View our privacy policy.
125 shares