You can make your own Vegan Pho!  It is super easy, I promise!  It may look intimidating with all of the herbs and spices like ginger cloves, star anise, chile peppers, and lime, but I have found a super easy way to make authentic tasting Vietnamese Pho soup that you can make yourself with very little effort! 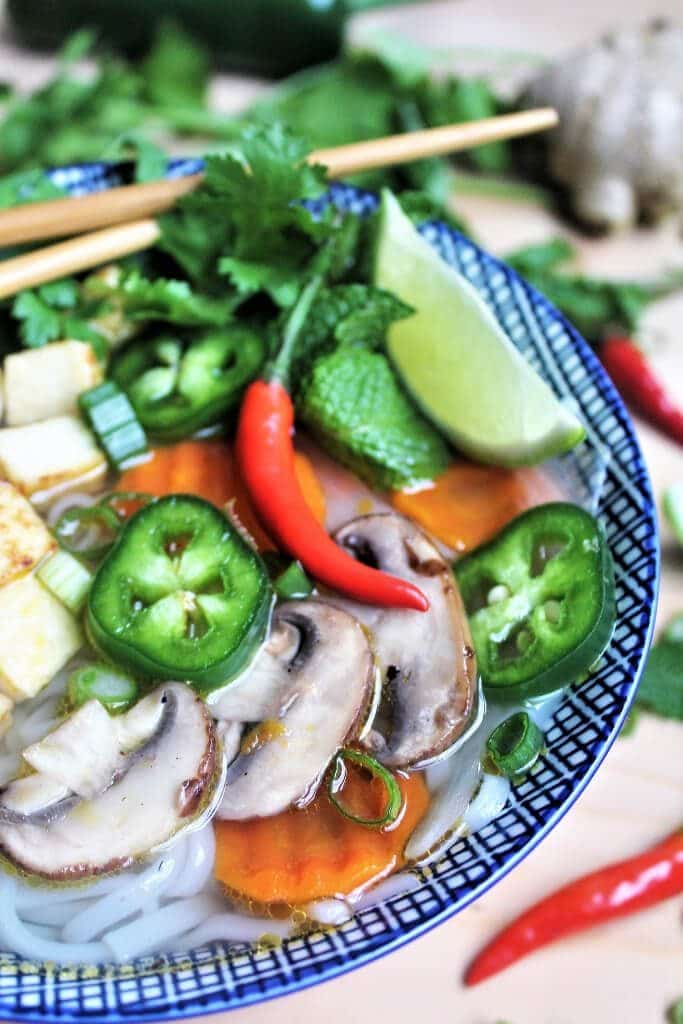 What is Pho soup?

Pho is a traditional Vietnamese soup filled with rice noodles and fresh herbs.  If you have never had Pho before, it's like a summer roll in the form of soup with a savory broth made of ginger, star anise, and cinnamon topped with fresh herbs and a squeeze of lime.

I love Vietnamese food and Pho soup is something I always order when we go to a Vietnamese restaurant. It never occurred to me that I could make it at home and get the herbs and spices right to get those same authentic flavors.

The Easy way to make an authentic tasting Pho soup:

While shopping at my local Asian market, I came across this soup mix for Vegan Pho and it said "certified vegan" right on the label!  I couldn’t believe my eyes!  Of course, I went home and made it that night.  My family was shocked by how much it tasted like the real thing from our favorite Vietnamese restaurant.  (This is not a sponsored post.  I just like and use this product).

Pho soup seems too complicated!  Can I really make it myself?

Yes! There are quite a few herbs and spices that go into authentic Pho, so it may seem a little overwhelming.  Don’t worry, if you use this soup mix, it is seasoned perfectly with all the spices that you need.  All you have to do is add veggies and noodles to the broth. This vegan pho is actually amazingly simple and can be served bar style, so everyone can make their own bowl adding just what they like to their own soup. 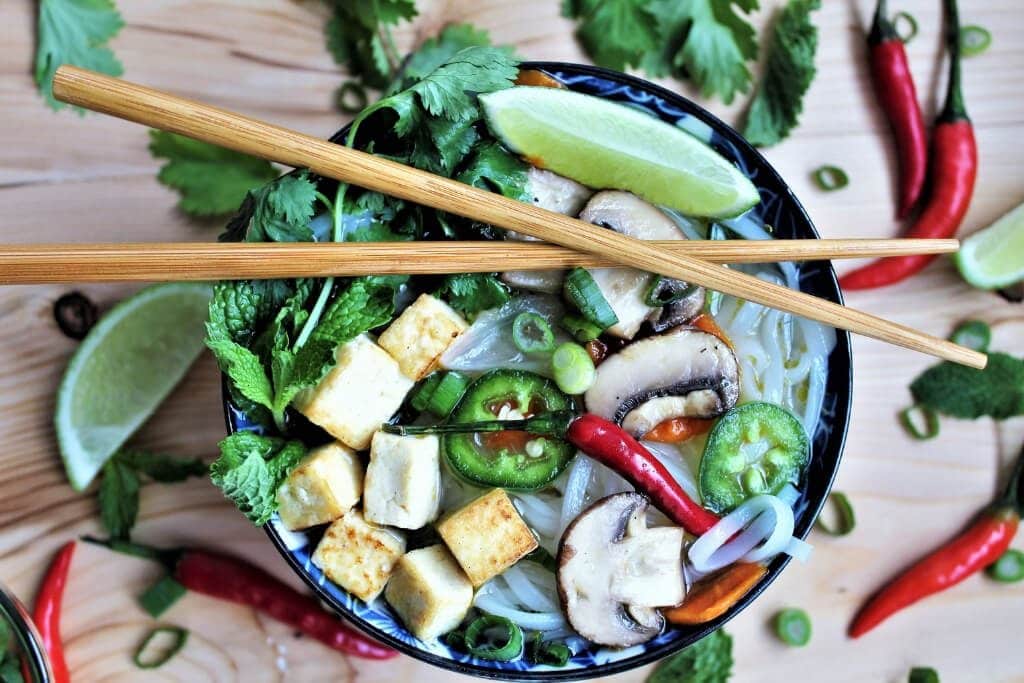 How do I make the broth? 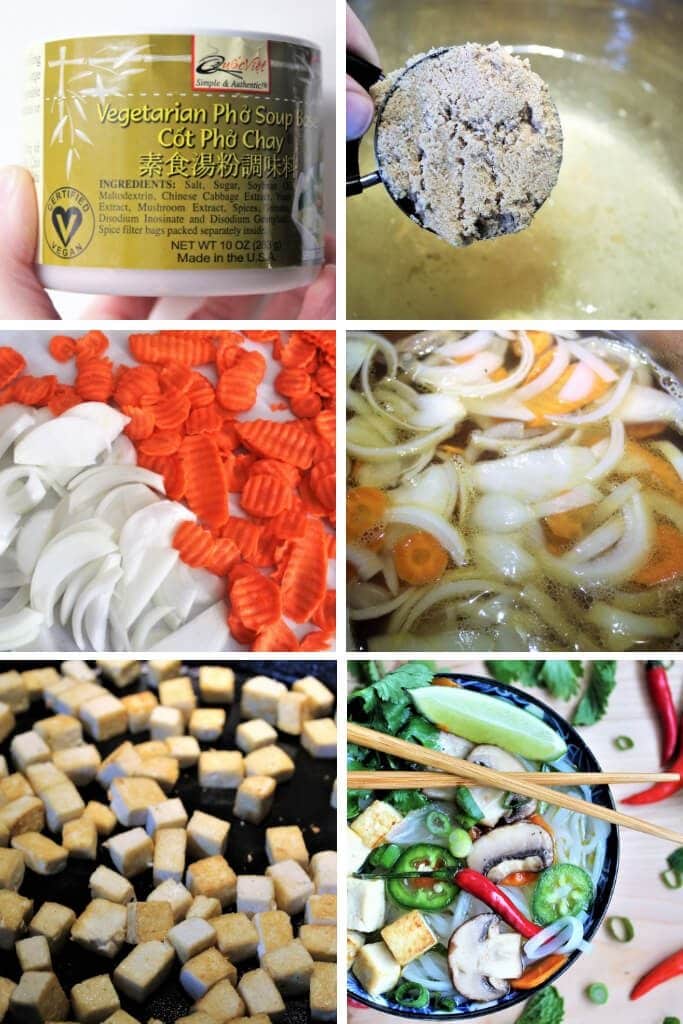 What do I add to my vegan Pho soup?

How do I serve Pho soup? 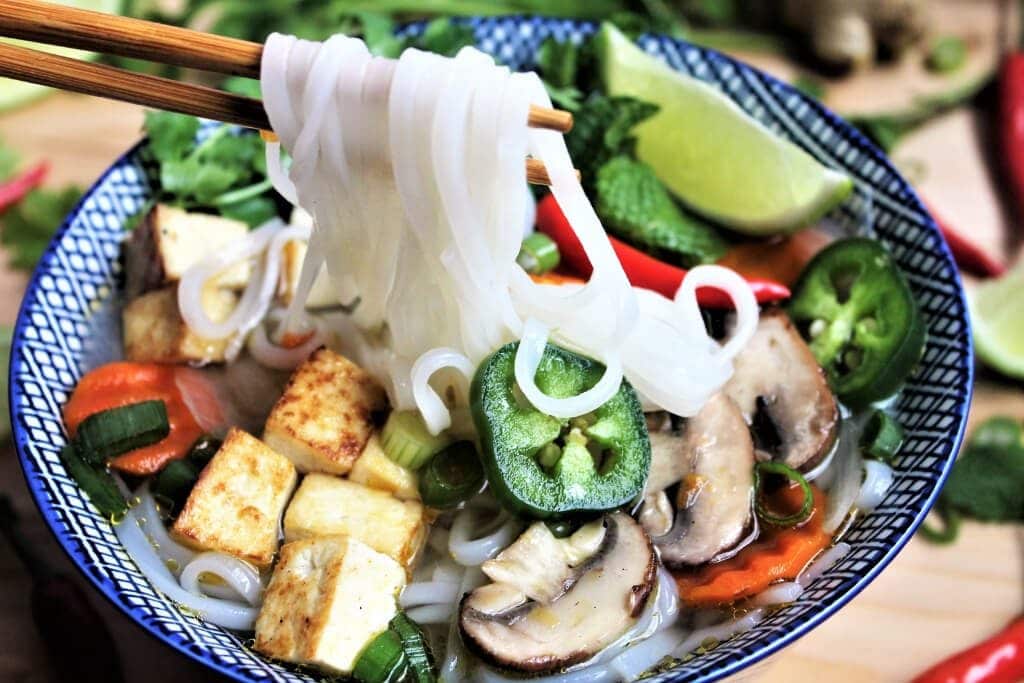 Note: This vegan Pho is great for parties or large dinner parties.  You can make the broth ahead of time and have all the elements ready to add to the bowl.  People love choosing their favorites, plus the soup is gluten-free and vegan, so everyone can eat it!

Try this simple way to make Easy Vegan Tom Yum and Tom Kha Thai Soup! You will think that this spicy soup was from your favor Thai restaurant!

Did you make this vegan Pho soup?  Leave a comment and let me know how it went! 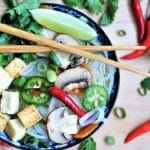 A savory Vietnamese soup filled with spices, rice noodles, and fresh herbs!  Topped with tofu and mushrooms and a squeeze of lime.

We are a participant in the Amazon Services LLC Associates Program, an affiliate advertising program designed to provide a means for us to earn fees by linking to Amazon.com and affiliated sites. View our privacy policy.
1274 shares