Vegan tom yum soup is a sweet, sour, and spicy soup originating from Thailand. It's full of flavor from a variety of herbs and spices like lime leaves, galangal, lemongrass, peppers, cilantro, and more. This delicious soup is a perfect starter or side to serve with your favorite Thai meal.

I always ordered Tom Yum when I went out for Thai food, but I was intimidated to make it myself. It just seemed like too many herbs and spices to hunt for at the grocery store, but then I found a vegan Tom Yum Soup Base at my local Asian market that said certified vegan on the label. It is identical to the flavor of Tom Yum from the Thai restaurant, and now I can make it at home anytime for a fraction of the price.

Yes, it can be a very spicy soup! You can adjust the amount of soup base that you use to control the spice level.

I was first introduced to Tom Yum soup in college. I was sick with a bad cold and a friend suggested that we go get some spicy Tom Yum. After a few sips of the soup, my sinuses cleared and I could breathe again! I now eat a bowl of it, as spicy as I can handle, every time I get a cold!

Refrigerate: Vegan Tom Yum soup will keep well in the fridge for 3 - 5 days in a sealed container.

Freeze: Tom Yum freezes well and can be stored in an airtight bag in the freezer for up to 3 months.

Reheating: Reheat the soup in the microwave for about 3 minutes or reheat in a saucepan until warm. 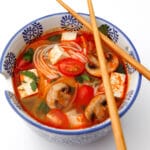 We are a participant in the Amazon Services LLC Associates Program, an affiliate advertising program designed to provide a means for us to earn fees by linking to Amazon.com and affiliated sites. View our privacy policy.
192 shares