Vegan soy yogurt that's thick, creamy, and delicious! Free of sugar and gluten and made with your favorite probiotic!  It's so easy to make your own you may never need to buy vegan yogurt again!

Living without dairy for the past 18 years, I have made many attempts to make my own vegan soy yogurt. Years ago, the Silk brand sold large containers of plain and vanilla yogurt.  These were great and my family loved them. Over the years the containers got smaller, they got more expensive, and they changed from organic to non-organic soy. I tried many other brands and varieties including coconut and almond yogurt, but my family hated them, and they just wanted soy yogurt again.

When my son got sick with PANDAS, an autoimmune disorder associated with strep infections, I realized that he did not tolerate the streptococcus thermophilus probiotic found in most yogurt, so I had to make my own using probiotics that did not contain this strain of probiotic.

I like the challenge of making things vegan, so I took on the yogurt challenge with a smile. That is… until I failed about 20 times. It would come out occasionally, but it never really tasted as good as the vegan soy yogurt that I used to buy.

What method should I use to make soy yogurt?

I used many methods over the years. I made it in a slow cooker, in the oven with the light on, and even borrowed a friend’s yogurt maker. The yogurt maker had the most consistent temperature, so it did work the best, but it only made very small batches. It would take ½ a day to make it and 15 minutes for my family to eat it all.

Is an Instant Pot really worth it?

Yes! I finally splurged and bought an Instant Pot with a yogurt setting! It makes it so much easier, and it’s totally worth it if you plan on making yogurt regularly! Instead of pouring milk into little jars, you can just pour the milk directly into the instant pot and you're ready to go!  I frequently double the recipe and make 8 cups of yogurt at a time.

Making this vegan soy yogurt with an instant pot is so easy, that my 9-year-old has actually claimed it as his job.

How to make vegan soy yogurt

Note: (It will start to look like yogurt after 8 to 12 hours, but I always give it 15 hours to allow more beneficial bacteria to grow and give it more of a yogurt tang).

What type of soy milk is best for soy yogurt?

There are only a few ways that you can mess up this yogurt, the main way is to use the wrong soy milk. There are so many kinds out there it will make your head spin.  However, there are only a few that actually work to make vegan soy yogurt.  You must use the ones that only have soybeans and water, any added sugar or vanilla will ruin your yogurt!   I like Trader Joe’s brand, but Westsoy also makes a plain variety that works well too.

What is the best starter for soy yogurt?

At first, I was intimidated by the yogurt starter, but it turns out that you don’t need anything fancy.  You can just use any probiotic that comes in a capsule that pulls apart to sprinkle the contents into the soy milk. (I use a general acidophilus probiotic with 2.4 billion CFUs per serving that comes in a vegan gel cap).

Your first batch of yogurt will come out okay, but not great.  Don't worry, this is normal.  It is only after you save your starter and make another batch or two, that your yogurt will start to taste amazing! I have been using the same starter for months now and it just keeps getting firmer and tasting better with each batch.

After your yogurt has finished, allow it to cool to room temperature and use a large flat spoon to remove any liquid that has formed at the top, then transfer it to containers with a good seal.

How should I store the starter?

It’s hard to remember not to eat up the last ½ cup of yogurt, especially if you have other people in your house that may unknowingly gobble it down.

I store my yogurt in glass containers that have snap-on sealed lids to keep it airtight. Use the size that holds 4 cups to store the yogurt for the family to eat, and then store ½ cup of starter in the smallest container and write starter across the top, so that no one touches it.

Use the starter again within 10 days to make a fresh batch of soy yogurt.  (Make sure your starter is stored in a clean and sealed container)!

How to make vanilla soy yogurt?

Plain yogurt has a sour tang to it and you may want to add a sweetener. You can keep it plain and let people add berries, sweeteners, or vanilla extract. If you know your family will want vanilla, add 1 tsp of vanilla extract and 2-3 tablespoons of sweetener of choice to 4 cups of yogurt for vanilla yogurt.

Another great trick that I love is to add 100% fruit preserves or jam to the bottom of a jar and layer the top with yogurt. One batch will make about 10 of these fruit on the bottom jars ready to grab and go!  You can also make the yogurt in these jars! Check out this post from Little Blue Plates to see how.

How to make perfect vegan yogurt

Why make your own yogurt?

Learn more about how to make more homemade vegan staples like vegan butter, mayo, cream cheese, and caramel sauce in my cookbook The Ultimate Guide to Vegan Staples! 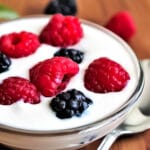 We are a participant in the Amazon Services LLC Associates Program, an affiliate advertising program designed to provide a means for us to earn fees by linking to Amazon.com and affiliated sites. View our privacy policy.
4463 shares