This quick and easy homemade vegan brown gravy recipe can be made in minutes with just a few simple ingredients!  All the savory comforting flavors of classic gravy that you love made without meat or dairy!

Brown gravy is traditionally made from beef drippings.  That is what gives it the brown color and meaty flavor, however, it's easy to make it vegan by replicating the flavors with a beef-flavored vegan broth and some soy sauce to give it an extra savory flavor.

I use these flavors in my vegan beef, vegan ground beef crumbles, and vegan beef stew recipes too and it works perfectly.

This plant-based brown gravy is perfect to serve for holiday meals like Thanksgiving or Christmas. It's so easy to make, you can serve it with your savory weeknight meals, pour it over vegan biscuits, vegan meatloaf, or even French fries.

🥄 How to make vegan brown gravy

Step 1 - Put all of the ingredients except for the vegan butter into a saucepan.  (The broth should be cold or add cold water and a bouillon cube).

Step 2 - Whisk until the starch dissolves.

Step 3 - Turn on the stovetop to medium heat and frequently stir until it starts to boil.

Step 4 - Stir constantly for 30 seconds then turn off the heat.

Step 5 - Add the vegan butter or oil if you choose and stir until it's incorporated.

🍄 How to make mushroom brown gravy

If you want to turn this into a vegan mushroom gravy, saute sliced mushrooms of choice in a separate pan in a little olive oil. Sprinkle with a dash of salt and cook for about 5-7 minutes until tender, then pour the vegan gravy mixture over the mushrooms and stir well.

🥄 How to thicken gravy

You can use many things to thicken your gravy.  All-purpose flour, cornstarch, potato starch, and arrowroot all work well.  White flour is easy if you don't need it to be gluten-free.

Personally, I prefer to use potato starch.  I feel that it gives it the best flavor and texture and it doesn't get gloppy and thick when it begins to cool as other methods do.  I even prefer it over wheat flour for its great consistency and flavor!

See my post on vegan gravy for more gravy varieties or try my vegan chicken a la king.

🥡 How to store gravy

The brown gravy will keep well in an airtight container for up to 5 days in the fridge or store leftovers for up to 3 months in the freezer.

🍽️ What to serve with brown gravy 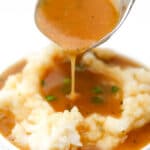 We are a participant in the Amazon Services LLC Associates Program, an affiliate advertising program designed to provide a means for us to earn fees by linking to Amazon.com and affiliated sites. View our privacy policy.
6924 shares