This lemony, vegan lentil soup with kale is made creamy with a dollop of vegan sour cream, and slightly sour with a squeeze of fresh lemon!  This is seriously the BEST lentil soup you will ever eat!  With lentils cooked perfectly is a savory broth with just the right amount of creaminess and acidity to make the perfect bowl of soup! 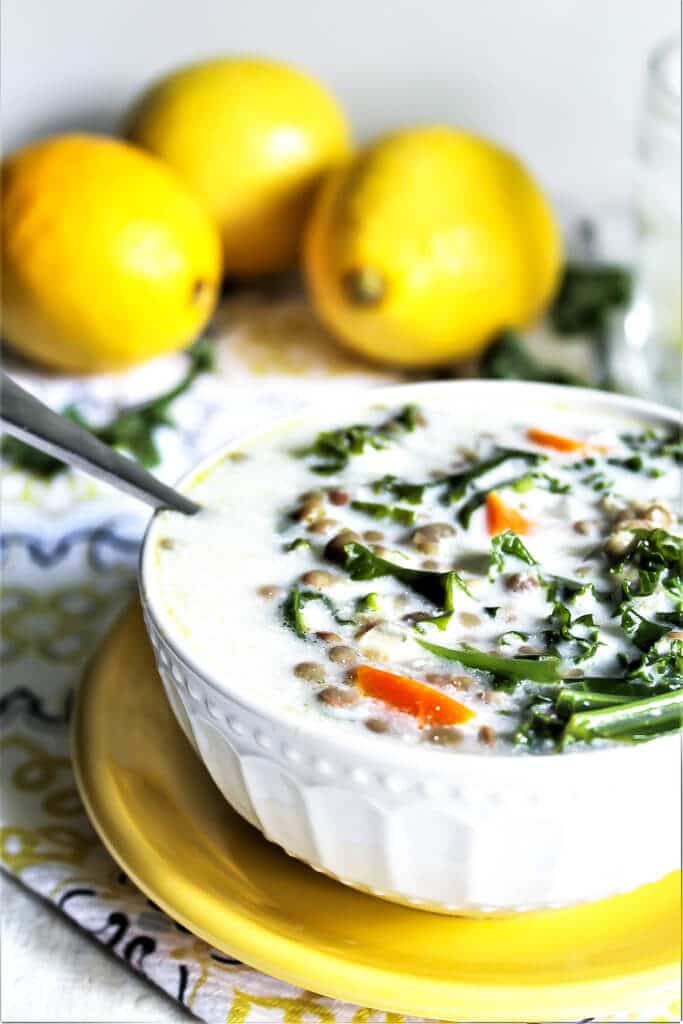 This lentil soup is:

I was never a huge fan of lentil soups that are cooked down a lot until you could no longer distinguish the lentil from the rest of the broth.  It reminds me too much of split pea soup.  Something that I just can't get over the color or texture of to enjoy, but it's not the case with this soup!

What makes this lentil soup the best you will ever have?

To avoid that mushy texture that you can sometimes get with other lentil soup recipes, I cook my lentils separately and drain and rinse them well.  This allows you to control their texture and washes off the bitter flavors which will leave you with a perfect tasting lentil. 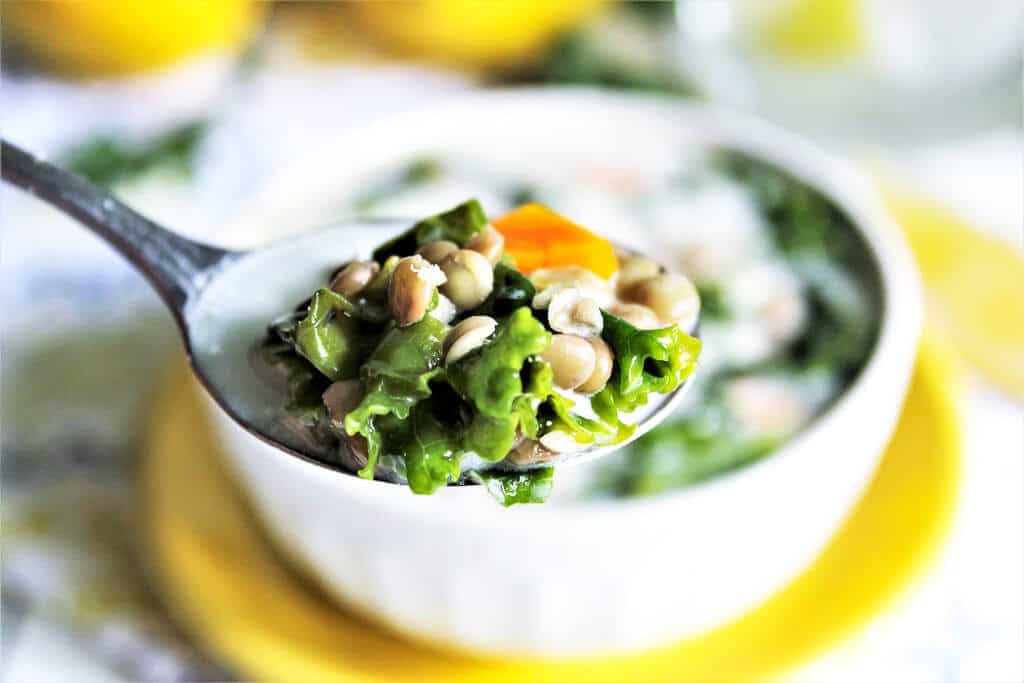 This vegan lentil soup has a light and creamy broth with the perfect kick of sourness from the lemon and vegan sour cream.  Slightly sweet, savory, and sour, these complex flavors will get you hooked.  This is anything but a boring lentil soup!

How do you make the perfect vegan lentil soup with kale?

Why should I massage the kale?

Massaging kale helps the taste and texture of the kale.  If you've tried kale before and thought it was too tough or slightly bitter, try massaging it next time and you will be surprised how delicious it is with a little extra work.

Does this soup freeze well?

Yes!  This soup tastes the same out of the freezer as it does fresh!  That is why the recipe calls for such a big pot.  If this makes too much for your family, simply freeze the rest and you will have a delicious soup ready for lunches or those nights you don’t feel like cooking.

Does it work well for meal prep and lunches?

Yes!  This soup will keep well for about 3-4 days in the fridge.  It’s perfect for meal prep or lunches for the rest of the week!  If you have leftovers, just toss it in the freezer for a perfect soup that will last up to 3 months! 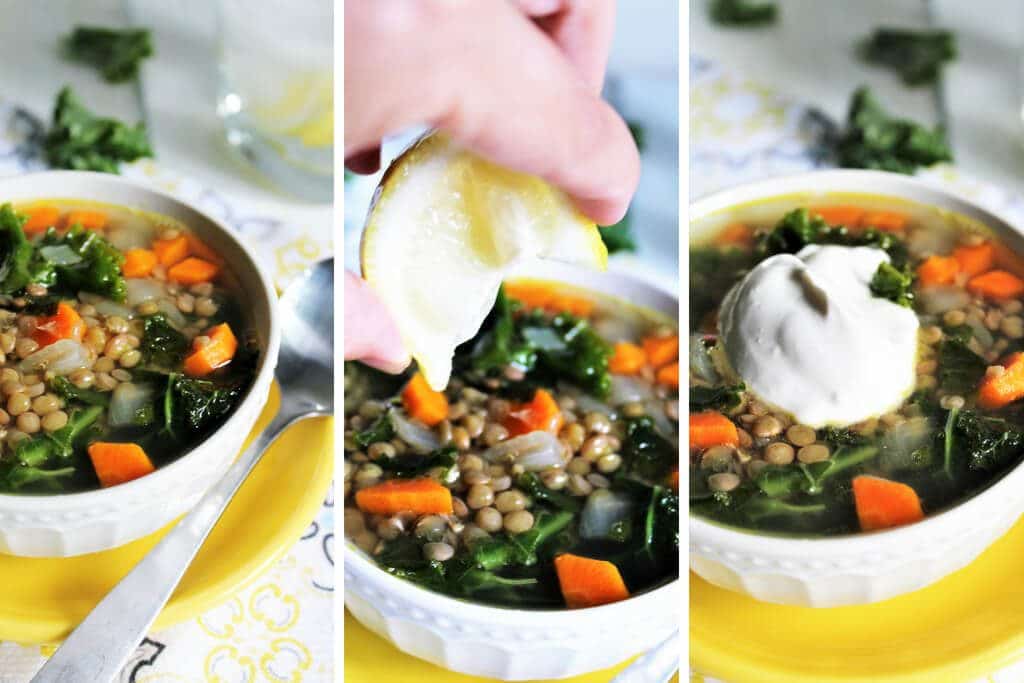 Can I use spinach instead of kale in this soup?

Yes, if you prefer spinach, it also works well in this soup.  Simply omit the step of massaging it and be sure to add it at the very end of cooking instead of 5 minutes before the end of the cooking process.  If you plan on using this soup for meal prep, kale will hold up better to freezing and reheating than spinach.

How should I serve this vegan lentil soup with kale?

I serve this soup with vegan sour cream and lemon wedges on the side to allow each person to choose how creamy or lemony they want their soup. 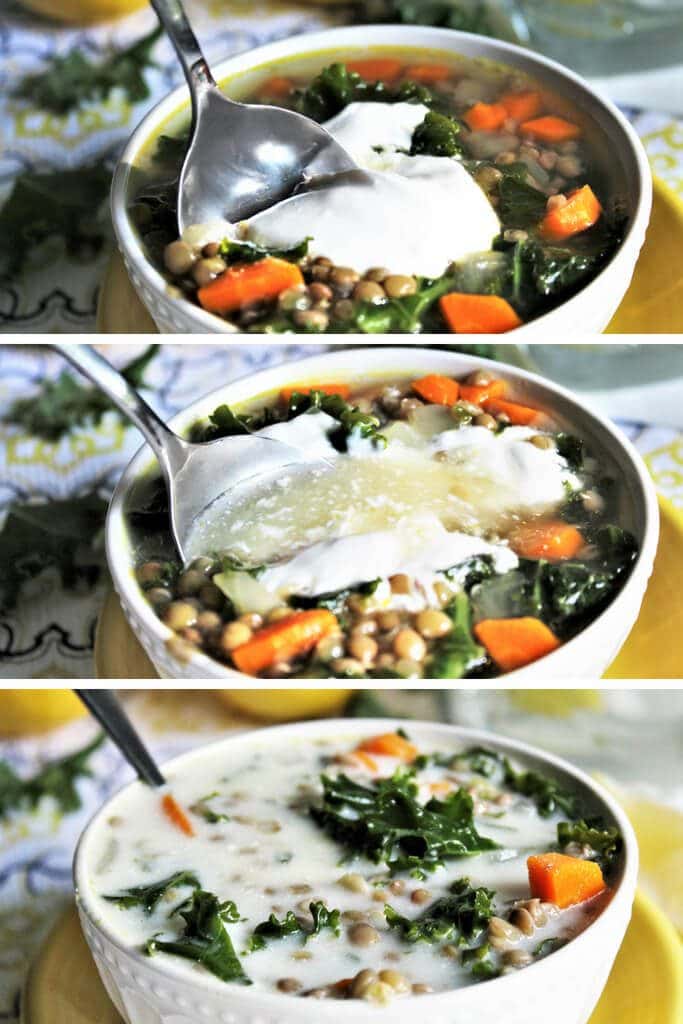 Stir it all up for the best bowl of lentil soup that you have ever had!

Want to learn how to make your own vegan sour cream in minutes?

If you like soups with lentils and kale, you have to also try my Vegan Red Lentil Soup with Pumpkin and Kale.

Don't forget to pin this vegan lentil soup with kale and lemon for later!

A creamy, lemony lentil soup made with kale and topped with vegan sour cream and a squeeze of lemon.

We are a participant in the Amazon Services LLC Associates Program, an affiliate advertising program designed to provide a means for us to earn fees by linking to Amazon.com and affiliated sites. View our privacy policy.
1280 shares