This gluten-free graham cracker crust recipe will amaze you!  Not only does it taste delicious, but it's also vegan, refined sugar-free, soy-free, and nut-free as well!  It's easy to make in about 5 minutes in your blender or food processor.  With just 4 basic ingredients, you can have a gluten-free graham cracker crust that tastes better than the traditional crust recipe and healthier too!

This crust is not actually made from crackers or cookies, but oats and coconut sugar which give a surprisingly similar flavor and texture to graham crackers.  My family loves cheesecakes and cream pies for dessert, but when we had to go gluten-free, I struggled to come up with an alternative graham cracker crust.  All the recipes that I saw called for nuts.  Since my husband hates nuts I had to come up with an alternative.

Now that my son can eat gluten again, we still use this recipe simply because we prefer the taste to processed graham crackers and it's not easy to find vegan graham crackers without honey in them.

❤️ You'll love this recipe because it's

❔ Do I need to spray or line the pan?

No.  Your crust will come off the pan easily if you can get a knife under it.  If you are using muffin tins, where you won't be able to get a knife under the slice, then use a strip of parchment paper to help you lift it out of the dish as shown above.

If you are making it in a pie dish instead of a springform pan, put 1/2 inch of hot tap water in a large cookie sheet, set your pie dish in the hot water for 1-2 minutes to warm the bottom of the pie crust, and it will easily release from the pan.

🌟 Pie recipes to fill your crust 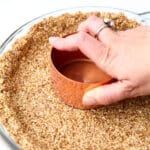 *This recipe was originally published on May 25, 2018.  It was updated on April 27, 2020, to include new images and recipe technique improvements.

We are a participant in the Amazon Services LLC Associates Program, an affiliate advertising program designed to provide a means for us to earn fees by linking to Amazon.com and affiliated sites. View our privacy policy.
2287 shares