This gluten-free and vegan s'mores pie topped with a homemade vegan marshmallow fluff is sure to be your new favorite vegan no-bake summer dessert!  However, chocolate, marshmallows, and graham crackers are a delicious flavor combo that you shouldn’t miss out on!
So… That is why I created S’more Pie!

❤️ Why make this recipe

Rich and creamy vegan chocolate pie filling layered between a graham cracker crust and fluffy marshmallow topping made from vegan meringue! You can even “toast” the top with a culinary torch (crème Brûlée torch) for an authentic s’mores taste!

Start by making a graham cracker crust. You can use a pre-made one (most are vegan) or make your own by following the directions on the graham cracker box and substituting vegan margarine or my vegan butter for butter.

Since my family is gluten-free, I make a homemade gluten-free graham cracker crust out of gluten-free oats, coconut sugar, and some coconut oil to hold it together!

This pie topping is pretty magical. It uses aquafaba (the liquid from a can of chickpeas) to make a light and fluffy marshmallow fluff!

❔How to make the aquafaba firm?

The secret to turning this whipped aquafaba into a marshmallow consistency is agar agar.(It's a vegan gelatin-like powder made of seaweed that you can use to make things set firm like vegan jello or even vegan cheese).  Make sure to use agar agar powder and not the flakes.  I find the best price on it at my local Asian market or on Amazon.

The best way is with a culinary torch. (I do not yet own a culinary torch, so I use my husband’s welding torch, which works too, but it is just heavy and harder to hold than a small kitchen torch – and we won’t talk about the cleanliness of it).

Simply, turn on the flame and run it back and forth over the pie holding it just far enough back that the end of the flame just barely touches the marshmallow topping. Brown your topping to your taste.

I have also tried broiling it in the oven to “toast” the top, but that wasn’t easy, and it heats up the whole pie, which you want to stay cold, so I highly recommend a culinary torch.

The only thing better than s’mores is... s'mores pie! 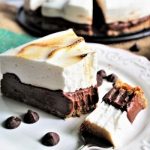 We are a participant in the Amazon Services LLC Associates Program, an affiliate advertising program designed to provide a means for us to earn fees by linking to Amazon.com and affiliated sites. View our privacy policy.
19226 shares