This vegan tuna salad recipe can be made into a vegan tuna melt or used in a tuna salad sandwich. It’s creamy, delicious comfort food that will bring you back to your childhood days of tuna sandwiches packed in school lunches.

A tuna sandwich is one of those recipes that reminds me of my childhood, and for some reason, I just feel like my vegan kids need to know what one tastes like as well.

Vegan chickpea "tuna" salad sandwiches are delicious and I make them frequently as well. However, I craved the taste and texture of that classic tuna sandwich that I ate as a child. I fiddled around with ingredients and proportions until I came up with something pretty darn close to the taste and texture that I remember! This basic recipe for vegan tuna can be used to replace canned tuna in any recipe and works great in a vegan tuna casserole too!

❤️ This recipe is

To make a vegan tuna melt

Refrigerate: The vegan tuna salad will keep well in the fridge for 3 - 5 days in a sealed container.

Freeze: If you don't think that you can use up all the vegan tuna salad in a few days, store it in an airtight container in the freezer for up to 3 months. 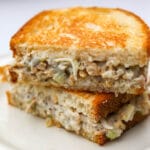 For a tuna melt

*This recipe was originally posted on July 11th, 2017. It was updated on August 31 2021 to include new images and more detailed instructions.

We are a participant in the Amazon Services LLC Associates Program, an affiliate advertising program designed to provide a means for us to earn fees by linking to Amazon.com and affiliated sites. View our privacy policy.
2938 shares