This chickpea omelette is the best invention for a vegan breakfast since sliced bread!  It’s vegan, gluten-free, soy-free, and of course, egg-free, yet tastes surprisingly similar to egg omelettes!  If you haven't cooked with chickpea flour yet, you have to try this recipe!  It cooks up like magic!

They’re incredibly easy to make and you can add any of your favorite ingredients like mushrooms, peppers, spinach, or onions.  Fold in some vegan cheese and you will have an unbelievable vegan chickpea omelet!

❤️ Why these omelets are great

❔ What is chickpea flour?

These vegan omelettes are made from chickpea flour aka garbanzo bean flour.  If you have never used chickpea flour before, it’s pretty amazing stuff!  It is high in protein and fiber and when rehydrated and cooked, it has an egg-like flavor and texture like nothing else that I've found.

I like to use a chickpea egg in baking. It's the only egg substitute that can replace more than two eggs effectively in baking.

🥄 How to make a vegan omelette

Step 1 - Put chickpea flour, nutritional yeast, and salt, in a medium-sized mixing bowl and give it all a stir.

Step 2 - Add 1/2 of the water and stir well until it forms a smooth paste.

Step 3 - Add the remaining water and stir again until smooth.

Step 4 - Dice up the veggies you want to add to your omelette. (about ¼ cup of veggies per omelette).

Step 5 - Add oil to a well-seasoned iron skillet or a non-stick frying pan.

Step 6 - Saute the veggies on medium-low for about 3-5 minutes until they become tender.

Step 7 - Add the sauteed veggies to the chickpea flour batter.

Step 8 - Pour the chickpea flour batter into a hot oiled skillet and cook for about 5 minutes over medium heat until the top of the omelette no longer looks wet.

Step 9 - Carefully flip the omelette to the other side and cook for 3-5 more minutes until it is no longer soft in the middle.  (Loosen up the bottom with a spatula before flipping so it doesn't stick and break).

Step 1 - Top with cheese and fold over so that the cheese is in the middle.

Add any of the following to your omelettes. The flavor combinations are endless!

⌚ Make ahead and meal prepping

You can mix up a big batch of the dry ingredients and keep it in a jar in your pantry for up to 3 months. When you are ready to make omelets, just add water and veggies.

You can make up a big batch of the chickpea batter with veggies added in and keep it in the fridge for up to 3 days. Just fry up what you want whenever.

Make the chickpea omelets into vegan egg muffins. Simply bake them into muffin tins and have them ready for grab-and-go snacks!

Make them when camping - See my vegan boil-in-a-bag omelettes for the best vegan camping food idea ever!

Refrigerate: Keep any uneaten omelet covered in the fridge for 3 - 5 days.

Freeze: You can keep a cooked omelet in an airtight bag in the freezer for up to 3 months. Reheat them directly from the freezer or place them in the fridge to thaw overnight.

Reheating: Reheat them one at a time in the microwave for about 1-2 minutes or place them in a hot skillet for a few minutes on each side.

Chickpea flour even works to substitute many eggs in a recipe and makes an amazing vegan pumpkin pie, vegan brownies, and vegan creme brulee. 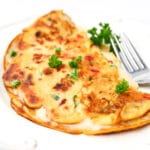 We are a participant in the Amazon Services LLC Associates Program, an affiliate advertising program designed to provide a means for us to earn fees by linking to Amazon.com and affiliated sites. View our privacy policy.
21945 shares