You can whip it up in less than 5 minutes to use as a pizza topping or fry up and add it to vegan lasagna, stuffed shells, goulash, baked ziti, stuffed peppers, Zuppa Toscana, and more.

❤️ Why you will love this recipe

❔What can I use instead of TVP?

If you don't have TVP you can use tofu instead. You won't need as much water since tofu is already hydrated. Be sure to follow my tofu sausage crumble recipe if you want to substitute tofu.

🥄 How to make TVP sausage crumbles

If using the TVP sausage for pizza

Sprinkle on pizza before cooking. No need to precook it.  It will cook along with the pizza.

If adding it to sauces or soups

Cook in a skillet - Add 1 tablespoon of oil to the bottom of a skillet and fry over medium heat for about 5 minutes until a little crispy and slightly browned.

🍕 How to make a vegan sausage pizza 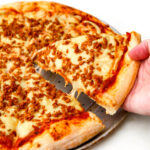 For the vegan sausage crumbles

For the vegan sausage

We are a participant in the Amazon Services LLC Associates Program, an affiliate advertising program designed to provide a means for us to earn fees by linking to Amazon.com and affiliated sites. View our privacy policy.
7492 shares