Tempeh bacon is a delicious vegan bacon alternative! Packed with protein and soaked in a salty smoky marinade for a true bacon flavor!  You can eat it for breakfast, put it in a vegan BLT, a veggie burger, or crumble it on a salad!  Most recipes that call for bacon can be swapped with this healthy, plant-based, tempeh bacon!

❤️ Why you'll love this recipe

Tempeh is a soybean product originating in Indonesia hundreds of years ago.  The soybeans are fermented with a mold called rhizopus and then pressed into a dense, high protein block. It’s similar to tofu in that it is made from soybeans, but it's less processed.  Tempeh has more protein and fiber than tofu plus beneficial probiotics. You can read more information and the health benefits of tempeh here.

There are many different varieties of tempeh like flax, whole grain, and veggie.  I prefer the plain variety because it tends to hold up better when slicing, marinating, and cooking, but any variety will work.  If you are gluten-free, be sure to make sure to select gluten-free tempeh, many varieties contain grains with gluten. If you are interested in making your own tempeh from scratch or just want to see a video of it being made, this is an excellent tutorial.

🌟 How to make tempeh crispy

If you want crispy vegan bacon, you have to use oil in the cooking process to crisp up the edges.  If you don't use oil, your bacon will be more dry than crispy.

If you want to use less oil or if you want to double the batch and make a lot, baking the tempeh is a great option.  Simply place the marinated tofu on an oiled baking sheet and bake at 375° F for 25 minutes, flipping after 15 minutes. If you want to make it oil-free, you can line the baking sheet with parchment paper and omit the oil.

The store-bought tempeh bacon is delicious, but a little pricey, so it was something that I only bought occasionally. It is usually about a dollar more for the bacon-flavored tempeh than the plain unflavored one, so with a few simple ingredients and about 5 minutes of your time, you can save $1.00 every time by making your own.

Tempeh bacon has a salty, smokey, umami flavor that will remind you of real bacon.  However, it's not as thin and crispy as real bacon.  It's a great substitution for bacon, but it won't fool anyone into thinking it's the real thing.  If you want something that has a more similar taste and texture to real bacon, check out my vegan bacon recipe that is a combo between rice paper bacon and tofu bacon.

If you need this recipe to be gluten-free:

If you want to use these as bacon bits, simply crumble up the tempeh before putting it into the marinade.  Coat it in the marinade allowing it to soak up for a few minutes, then bake or fry it as you would the longer strips.  (They will only need to cook for about 1/2 the time though).  If you want traditional bacon bits, you can use my recipe for vegan bacon bits made with TVP instead of tempeh.

Serve for as you would bacon for breakfast or on a sandwich like a vegan BLT!  It's great as a side with a Pesto Tofu Scramble or my Vegan Scrambled Eggs! 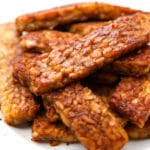 To Bake the Tempeh Bacon:

We are a participant in the Amazon Services LLC Associates Program, an affiliate advertising program designed to provide a means for us to earn fees by linking to Amazon.com and affiliated sites. View our privacy policy.
4931 shares