This veggie brownies recipe is one of those that you must taste to believe.  Packed with 2 cups of zucchini and 1 cup of beets, you may not think that they could taste very good.  Not only do they taste like brownies, but they're also my favorite vegan brownie recipe!  These hidden veggie brownies come out perfect with either gluten-free or wheat flour too.

I got the idea for these brownies from my friend Rachel who makes the most delicious gluten-free brownies with zucchini in them.  I decided to try to make them a little healthier by reducing the sugar and oil a little and adding beets.  To my surprise, they came out delicious!  Best of all, my zucchini and beet-hating son loves them!

If you have picky eaters, make sure to chop the zucchini up very fine in a food processor.  This will help hide the little green flex.

There will be some little dots of zucchini at the top of the veggie brownies, so I make a chocolate fudge frosting to hide them and add another layer of deliciousness!  This frosting is seriously amazing and I highly recommend using it!

If you have picky eaters and want to sneak in more veggies where you can, try these healthy vegan recipes with hidden veggies. 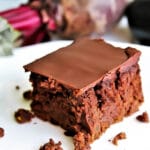 We are a participant in the Amazon Services LLC Associates Program, an affiliate advertising program designed to provide a means for us to earn fees by linking to Amazon.com and affiliated sites. View our privacy policy.
3405 shares