❤️ You will love this recipe because it's

Aquafaba translates from Latin as bean water. Yes, that stuff in the can of beans that you usually wash down the drain and rinse off the beans. Bean water doesn't sound very appetizing, so they call it something a little fancier – aquafaba!  I usually use the liquid from chickpeas, but any bean liquid will work.  Chickpeas and white beans will have the most neutral flavor and whip up the whitest, so most people choose one of those 2 beans.

Although it has a pretty name, you may still be turned off by the idea of bean juice. I was hesitant to try anything with aquafaba. Actually, it took me a few years before I worked up the nerve to try it. Wow! I was missing out! I wish I had gotten over it years ago.  It doesn't have much flavor itself but is delicious when sugar and vanilla are added.

Tip: Most people prefer to use unsalted beans for sweets made with aquafaba.  I have used both and I don't notice a big difference if you can't find unsalted beans.  I have also noticed that different brands of beans have slightly different flavors.

🥫 Do I have to use canned beans?

No, you don't need to use canned beans.  If you make your own beans from scratch, simply save the cooking water from your beans to make the whipped cream.

*This cooking liquid can be kept in the refrigerator for up to 5 days or frozen for up to 3 months.

Step 1 - Simply drain the liquid from a can of chickpeas or white beans into a mixing bowl. There is usually about a ¾ cup of liquid in the standard can.

Step 2 - Use a mixer to beat the liquid until it gets foamy.

Step 3 - Add a ¼ teaspoon of cream of tartar to help it to hold its shape. Then continue to beat the liquid for 5 more minutes on high until it forms stiff peaks.

Step 4 - Add 1 tbsp of vanilla extract. This will turn your whip cream slightly brown. Don’t worry, beat it for another minute or 2 and it will turn white again.

Step 5 - After you have whipped it for about 7 minutes, slowly add 2/3 cup of powdered sugar while continuing to beat the mixture for a total of 9-10 minutes.

Note: (I've seen some recipes that call for granulated sugar and I have tested it out, but I have found that it stays lighter and fluffier with powdered sugar).

Step 6 - (Optional) Turn off the mixer and add 2 tbsp of neutral oil like refined coconut or canola oil. Mix on low for about 5-10 seconds. Just enough to get the oil distributed through the whipped cream. (optional for a richer flavor).

Note:  If you over-mix once the oil has been added, it will lose its fluffiness. The oil gives it a rich flavor and mouth feel similar to real whipped cream.

If your whipped cream is not holding its form

😋 How to make aquafaba taste better?

Some people don't like the taste of the chickpea liquid.  If it tastes too salty to you, look for a low or no-salt variety. I have also noticed that different brands have different tastes, so you may just want to try another brand until you find one that you like.  You may also try using the liquid from white beans or cannellini beans instead.

You can easily make this whipped cream without adding any oil to it, and it will still taste great. It is a little lighter and fluffier without the oil, but it's a little less creamy too. So, if you don’t want the fat and extra calories, leave it out!

🥡 How to store the aquafaba whipped cream

Serve immediately on berries, ice cream, vegan chocolate cream pie, or your favorite smoothie, or keep it in the fridge for about 24 hours.

Freezing - If you are not going to use it the first day, store it in a sealed container in the freezer and use it like you would any frozen whipped topping like Cool Whip.  (Just take it out of the freezer and let it warm up for about 10 minutes before using it).  If kept airtight, it will keep up to a month in the freezer.

🍰 How to use this whipped cream

Now that you have opened a can of chickpeas and used the liquid, you need to make something with it. Make this easy vegan chickpea salad, a citrus salad with chickpeas, or a chickpea salad sandwich. 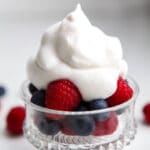 *This was originally posted on 2/9/2018.  It was updated on 2/17/20 to include new images and an instructional video showing how to make the aquafaba whipped cream.

We are a participant in the Amazon Services LLC Associates Program, an affiliate advertising program designed to provide a means for us to earn fees by linking to Amazon.com and affiliated sites. View our privacy policy.
3600 shares