Loaded vegan nachos are a quick and easy snack or full meal that will be a hit with everyone.  Make a nacho bar, choose your toppings like vegan nacho cheese, taco "meat," sour cream, beans, corn, salsa, guacamole, jalapenos, olives, or cilantro just to name a few.  Pile on your favorites and have a nacho feast!  Use whatever toppings that you have on hand and change them up every time you make them so you'll never get bored!

I love nachos for a quick and easy weeknight meal, for easy party food, or for movie nights!  It's easy to make enough to feed a lot of people and you can even set up a nacho bar and have everyone make their own plate with the topping of their choice!

❤️ Why this recipe is great

I prefer my homemade vegan cheese sauce because it's already melty and you don't have to try to get your nachos hot enough to get the vegan cheese to melt.  Some types of vegan cheese won't melt or get so hot that it burns the nachos before the cheese melts. If you want a spreadable vegan cheese that melts, try my melty vegan mozzarella recipe.

Nachos are great for parties or big family dinners.  If you use nacho cheese sauce you do not need to put the nachos in the oven to melt the cheese, so you can give everyone a plate and let them build their own nachos from a buffet-style setup.  If you have a fondue set or a small crockpot use that for the cheese sauce and set it to warm.  Set out small colorful bowls filled with the toppings and allow people to make their own. 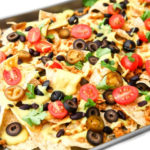 We are a participant in the Amazon Services LLC Associates Program, an affiliate advertising program designed to provide a means for us to earn fees by linking to Amazon.com and affiliated sites. View our privacy policy.
433 shares