This vegan linguine with clam sauce recipe is 100% vegan but has the taste and texture of the real thing!  I know that it’s hard to believe, but if you like the taste of seafood, you must try this recipe!

Before going vegan, I really liked seafood and it is something that I have missed.  I loved going to an Italian restaurant and ordering some buttery linguine and clam sauce.

How this recipe came about

A few years ago, my husband and I were eating at a local Chinese restaurant.  The owner happened to be walking past when we were ordering and overheard us that we were vegan.

He stopped and said, “You’re vegan?  I’ll make you something special!”  He brought us a delicious dish made with king mushrooms.  I had never had them before, and I couldn’t get over how much the texture was like seafood.  A few weeks later, I was shopping in an Asian market and noticed the mushrooms for sale.  I knew that I could create some great mock seafood recipes from these amazing mushrooms!

Where to purchase king mushrooms

The mushrooms are a little hard to find, but if you live near a major city, they are in most Asian grocery stores. I have also found them at my local Whole Foods. They are truly huge!

Comprised of mostly stem, each mushroom is dense and “meaty” with a mild flavor.  I cut off the top cap because it has a strong flavor, and the bottom inch or so of the stem because the texture is too chewy, then cut the rest into small cubes.

For this Linguine with clam sauce, I use my homemade vegan butter.  It tastes very similar to real butter and provides an authentic taste, but you can use regular vegan margarine too.

This vegan linguini with clam sauce is one of the easiest pasta dishes that you can make!  The whole thing only takes about 20 minutes, but it tastes as if it came from a fancy Italian restaurant! 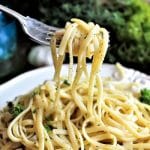 We are a participant in the Amazon Services LLC Associates Program, an affiliate advertising program designed to provide a means for us to earn fees by linking to Amazon.com and affiliated sites. View our privacy policy.
1037 shares