This vegan clam dip is amazing! It has fooled many people into thinking that it is the real deal. However, it's 100% plant-based and gluten-free! Made with king mushrooms for the clam texture and kelp granules to give it the authentic seafood taste. If you like clam dip, but no longer eat seafood, this is a must try!

Clam dip was one of those things that we would have on special occasions like New Year's Eve or at a Super Bowl party. I used to love the taste of seafood, and clam dip was my absolute favorite.

A few years ago, I ate my first king mushroom.  With the first bite, I knew that I could make amazing mock seafood recipes with them. I first made some vegan linguini with clam sauce, which came out delicious! Then I had the idea of making clam dip with these mushrooms. I was thrilled when it came out incredibly similar to the dip I remembered my mom making as a child!

🍄 How do you prepare king mushrooms?

To prepare these king mushrooms, simply wash them and cut off the bottom inch or 2 where it begins to get a harder texture and cut of the top brown cap as well. Then simply dice them into small cubes for this recipe.

Where can I buy kelp granules?

I find these kelp granules at Whole Foods or my local Asian Market, but you can also order it from Amazon if you don't live near one of these stores.  If you don't eat meat, but love that seafood taste, you won't regret getting some of this stuff!  I also use it to make my vegan "tuna" salad and my linguini with clam sauce which are both amazing)!

Where do you find king mushrooms?

I get mine at a local Asian market. They seem to consistently have them at most Asian grocery stores. If you can't find them near you and your feeling ambitious, you can order the spores through Amazon and grow your own. 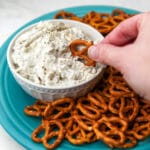 *This recipe was originally published on December 13, 2017.  It was updated on February 28, 2022, to include new images and more detailed information.

We are a participant in the Amazon Services LLC Associates Program, an affiliate advertising program designed to provide a means for us to earn fees by linking to Amazon.com and affiliated sites. View our privacy policy.
1081 shares