Make your own vegan shrimp for your favorite recipes like shrimp cocktail, shrimp scampi, or fried shrimp. This simple shrimp substitute will satisfy your cravings for seafood and is the perfect addition to pasta, soups, or spring rolls. Use store-bought vegan prawns or make homemade vegan shrimp from king oyster mushrooms and seasonings.

You have a few choices when it comes to vegan shrimp substitutes. If you are looking for a truly authentic mock shrimp, there are a few on the market. The Loving Hut brand shrimp is pretty realistic looking and close in taste and texture as well. I find it in the frozen section at my local Asian market, but you can also buy them from Vegan Essentials. If you can't find these faux shrimp near you, they can also be made at home with king oyster mushrooms (aka trumpet mushrooms) and seasonings.

Whether you use homemade or store-bought shrimp, you can use either one in your favorite shrimp recipes.

🔪 How to use king mushrooms

Always cut the brown cap off the top of the mushroom and discard it. It has a strong flavor that you don't want. The bottom section of king oyster mushrooms is also hard and doesn't have the soft seafood-like texture that you are looking for. Cut off the bottom inch or so where it feels harder than the rest of the stem.

How to make store-bought vegan shrimp

The frozen vegan shrimp brands, like Loving Hut brand or others that you can sometimes find in Asian markets, need to be cooked before they are eaten. There are no cooking instructions on the package, but the taste and texture are much improved when sauteed in a little butter and garlic.

Simply pan-fry the shrimp in 1 tablespoon of vegan butter for about 3-5 minutes on each side. (You can put them in the pan directly from the freezer. There is no need to thaw the shrimp first. For more flavor, add 1-2 cloves of fresh minced garlic during the last minute or two of cooking.

If you want to make a vegan shrimp cocktail, simply saute the vegan shrimp in a little vegan butter or oil for about 2-3 minutes on each side then allow them to cool. To make the vegan cocktail sauce, mix together 1/4 cup of ketchup with 2 tablespoons ground horseradish and stir well. Place the cocktail sauce in a fancy dish or bowl and arrange the shrimp substitute around the edges of the rim.

How to use vegan shrimp

Use your "shrimp" as you would shrimp in any recipe. Toss them into pasta dishes like vegan alfredo, creamy pesto pasta, tomato basil pasta, lemony spinach orzo, or make vegan shrimp scampi.

They are also delicious in summer rolls for in soups like Tom Yum or Tom Kha.

My favorite thing to do with vegan shrimp is to batter and fry it making a classic vegan fried shrimp in a basket.

Refrigerate: These homemade vegan shrimp will keep well in the fridge for 3 - 5 days in a sealed container.

Reheating: Reheat the "shrimp" by pan-frying in a little oil for a few minutes until warm. 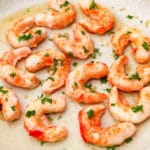 Homemade vegan shrimp (vegan prawns) made from king oyster mushrooms and seasoned to taste like shrimp. Use this mock shrimp as you would shrimp in any recipe.

We are a participant in the Amazon Services LLC Associates Program, an affiliate advertising program designed to provide a means for us to earn fees by linking to Amazon.com and affiliated sites. View our privacy policy.
350 shares