You may already know how easy chia seed pudding can be, but I just figured out a way to make it even easier! Make vanilla, berry, peanut butter, and chocolate chia pudding in minutes and store them in little mason jars for grab-and-go breakfasts and snacks for the whole week!

🥣 What is chia pudding?

If you have never heard of chia pudding, it is simply chia seeds that have been soaked in milk until they expand and become the texture of pudding.  No cooking is needed!

✨ Make this even easier

Blend it! This little hack to make chia seed pudding even easier is great for grab-and-go snacks and kids love them!

Put the pudding in ½ cup size mason jars for the perfect little healthy snack!  Sealed with a lid, they will keep in the fridge for up to 5 days!

❔Why use a blender?

I like to make my chia pudding in a blender because...

You can simply stir chia seeds into any flavored milk of your choice too.  However, this gives it a tapioca pudding texture that some people don’t like.  The seeds also clump up more and it takes a few hours to absorb the milk and become pudding.

The ratio of chia to milk is commonly anywhere from 1:4 to 1:8.  That is 1 part chia seeds to at least 4 parts milk of choice.  If you use 2 tbsp of chia seeds to 1/2 cup of milk, it will be a firm pudding.  (My kids actually prefer a 1:8 ratio using 1 tbsp to 1/2 cup of milk making it more of a thick smoothie texture, but less seedy).  You may want to fiddle around with the ratio to get the texture that you like.

I purchased a case of small ½ cup-sized mason jars, so I have 12 little cups ready to fill.  (This is also about the amount that my family of 4 will eat in 5 days' time).

My kids get bored with the same food quickly so I usually make 4 different flavors.  Their favorite flavors are vanilla, chocolate, berry, peanut butter, and chocolate peanut butter.

To mass-produce the chia puddings, I simply triple the amount for 1 chia pudding.  Put that amount in the blender and pour that into 3 mason jars.  Then I give the blender a little rinse and do it again with the other flavors until I have 12 jars of chia pudding ready to go in the fridge.

Since I'm not a morning person, cooking in the morning is not my thing. I love to have meals prepared and ready to eat. For hearty breakfasts, I love my veggie tofu scramble, vegan egg Mc Muffins, or tofu breakfast burritos.

Check out all of my breakfast prep ideas in my guide to Vegan Meal Prep Breakfast! 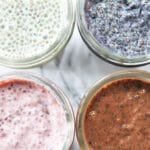 The base for 1 serving of chia pudding

For the vanilla pudding

For the chocolate pudding

For fruit or berry pudding

To make a large batch

If you want pudding with whole chia seeds

We are a participant in the Amazon Services LLC Associates Program, an affiliate advertising program designed to provide a means for us to earn fees by linking to Amazon.com and affiliated sites. View our privacy policy.
90096 shares