This homemade gluten-free and vegan sausage recipe makes it easy to make your own vegan beer brats, vegan breakfast sausage, and vegan Italian sausages.  Use the same base recipe and season it to make any type of vegan sausage.  Roll it in rice paper casing for sausage links or form it into patties. However you choose to make it, it's delicious! 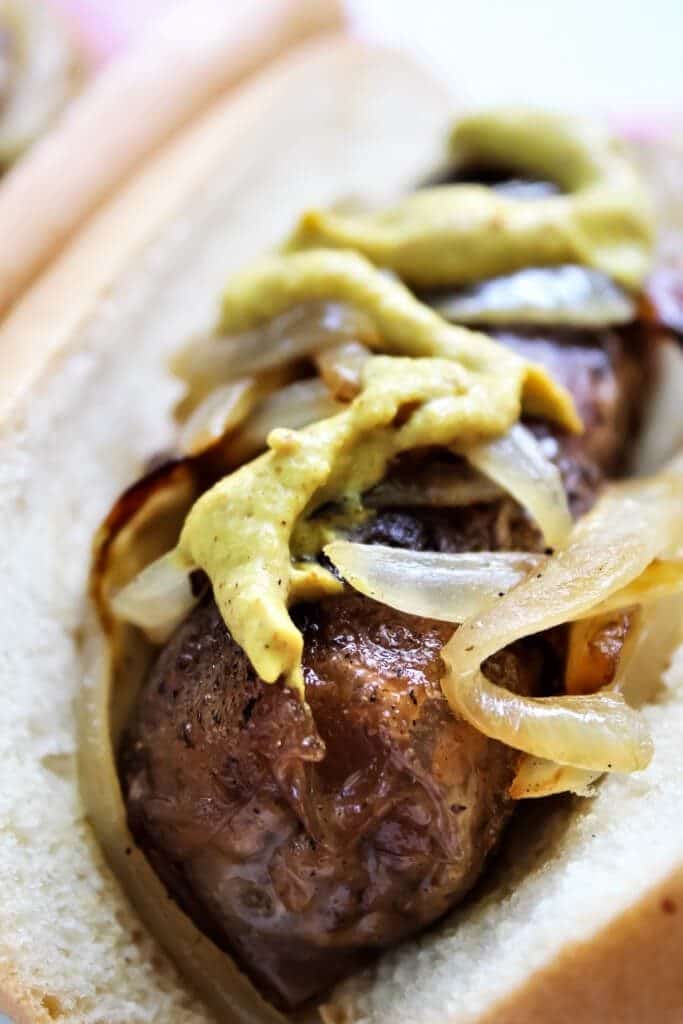 Packed with protein, and free of gluten, eggs, and dairy, you'll never buy vegan sausage again after you make your own.

Why should I make my own sausage?

During the time that I was vegan and not yet gluten-free, I enjoyed the store-bought vegan sausages, but still only purchased them occasionally due to the expense.  I was sad when I had to give them up completely because they contained gluten and surprised to find that almost none of the brands were gluten-free.

Determined to make a vegan and gluten-free sausage that was also budget-friendly, I tried many different methods until I finally perfected the flavor and texture.

I'm excited to share this recipe with all of you now!

Is all veggie sausage vegan?

No, not all veggie sausages that you find at the grocery store are vegan. Many contain eggs, and some have dairy as well, so if you are buying vegan sausage, be sure to read the label. 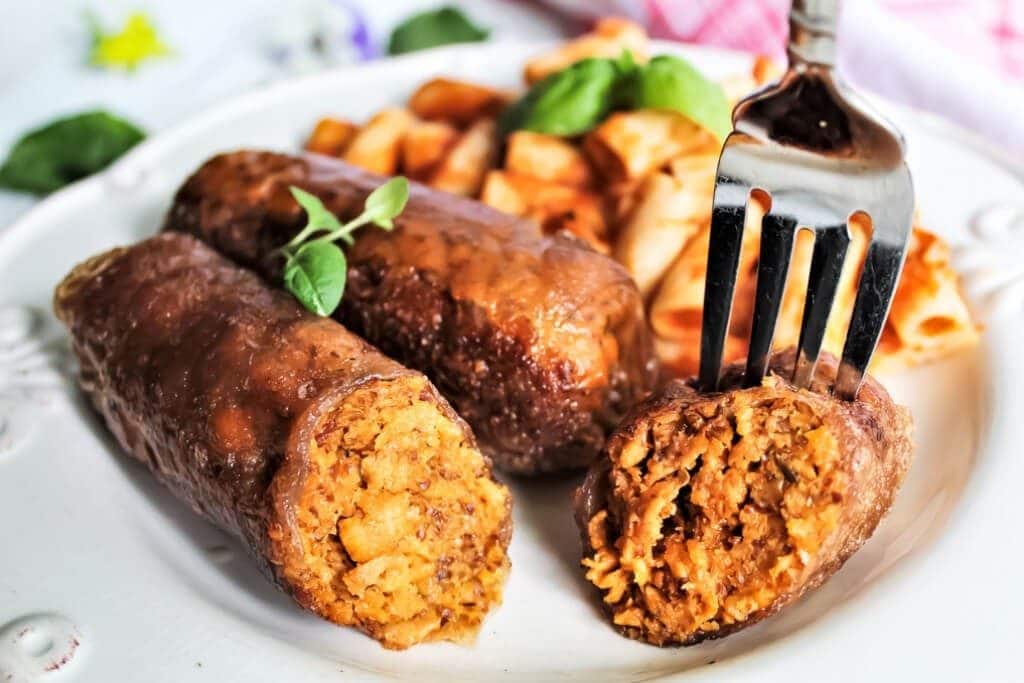 What is a vegan sausage?

A vegan sausage may not seem possible, but these vegan sausages are made from TVP (textured vegetable protein), oats, flax, and spices and wrapped in a rice paper casing to hold it all together.

How do you make these vegan sausages?

What are vegetarian sausage casings made of?

The casings of these sausages are made of rice paper wrappers. This is the same thing that you would use to make a summer roll.  (The brown spring roll wrappers work best, but the white will work as well). 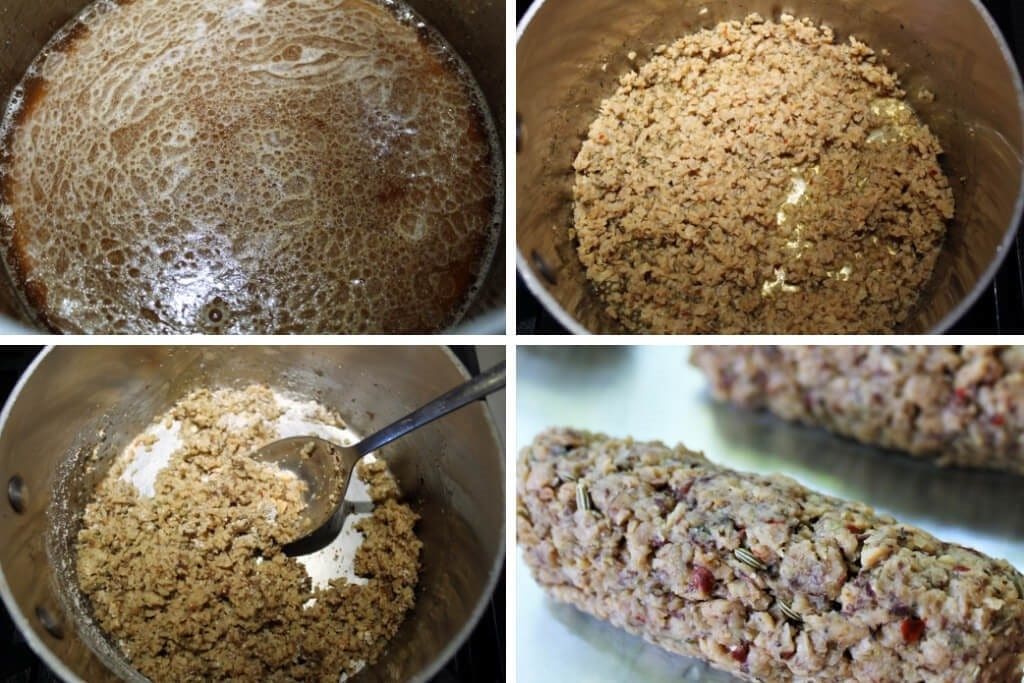 If you've never used them before, don't worry, it's very easy. 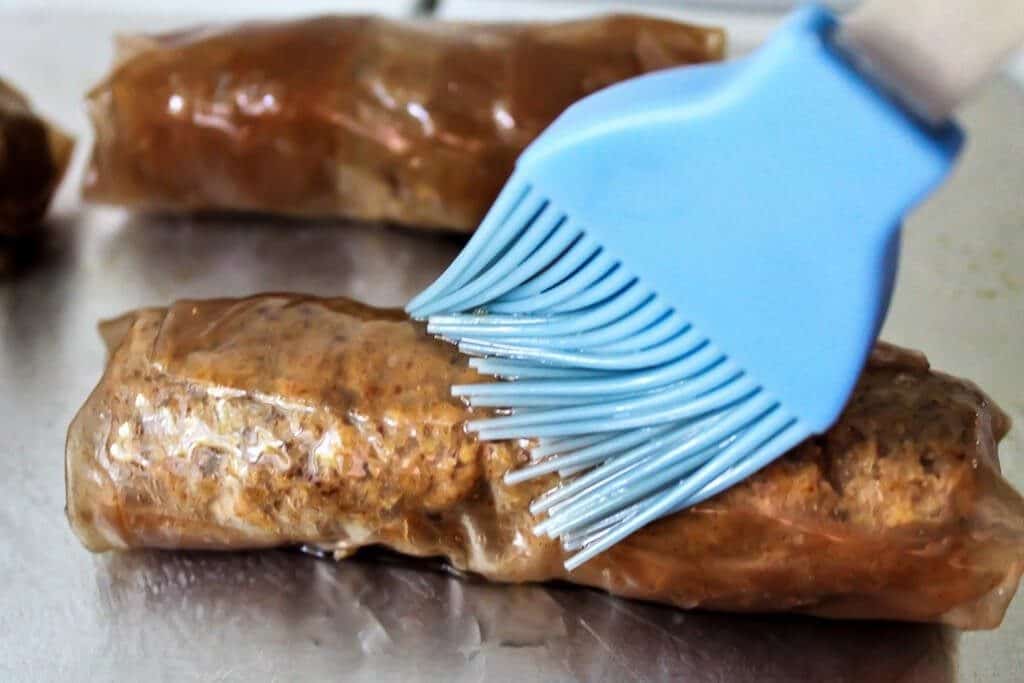 How should I cook these sausages?

You can either fry or grill these sausages.  Either way, just be sure that they are well coated in oil, so they don't stick to the pan or the grill.  Heat on medium low for about 7-10 minutes until they are heated through and slightly crispy on the outside. 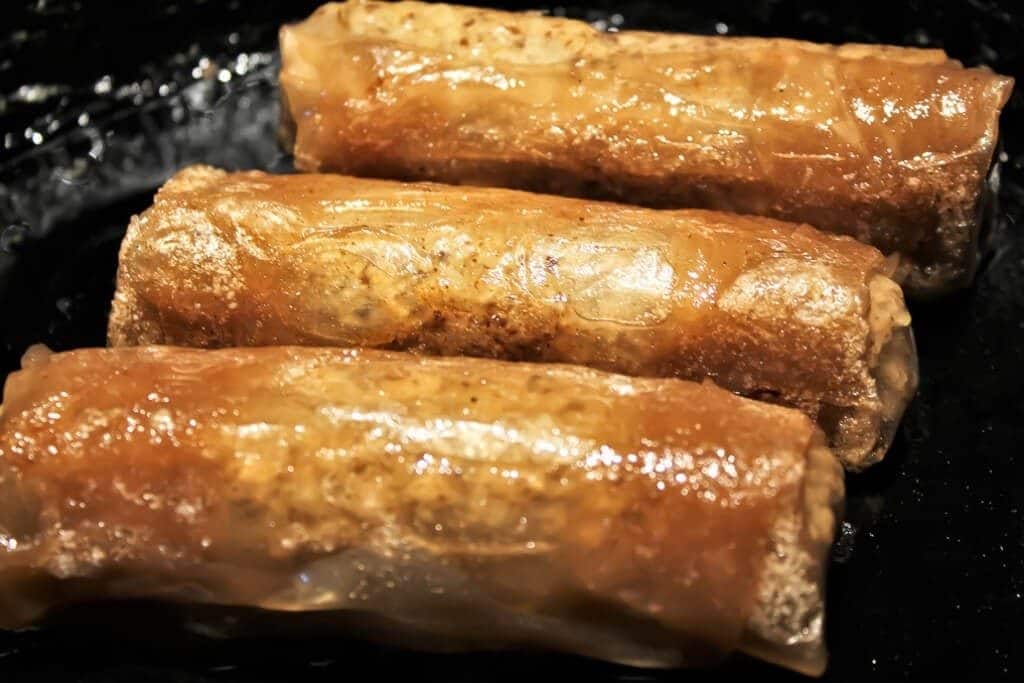 Can I grill these vegan sausages?

Yes!  These sausages work great on the grill!  Just make sure to coat them in oil before grilling to make sure that they don't stick to the grate.  Grill them over medium-low heat for about 7-10 minutes depending on the heat of the grill. 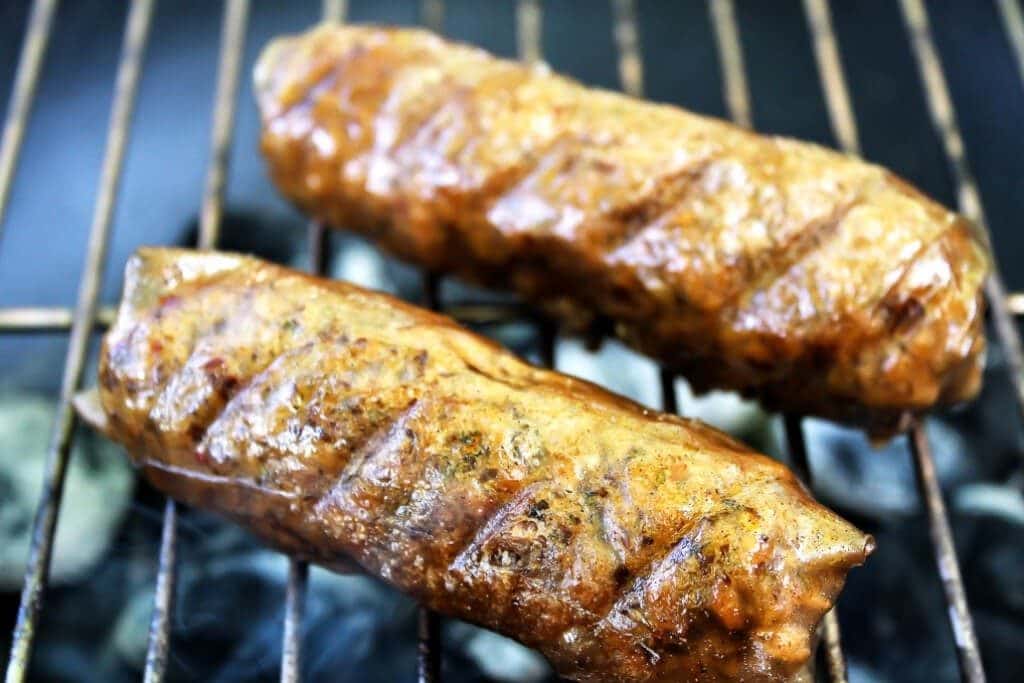 Is there a way to make soy-free, gluten-free, and vegan sausages?

Yes!  These sausages also work well with beans. They have a great flavor made this way, however, they just aren't quite as "meaty" tasting.

To make them soy-free, simply reduce the liquid by 1/2 (so only use 1/2 cup of water instead of a full cup) and use a can of washed and well-drained white beans instead of the TVP.  (TVP is made of soy protein).  Mash up the beans with a fork while they are cooking in the broth and follow the rest of the recipe the same way. 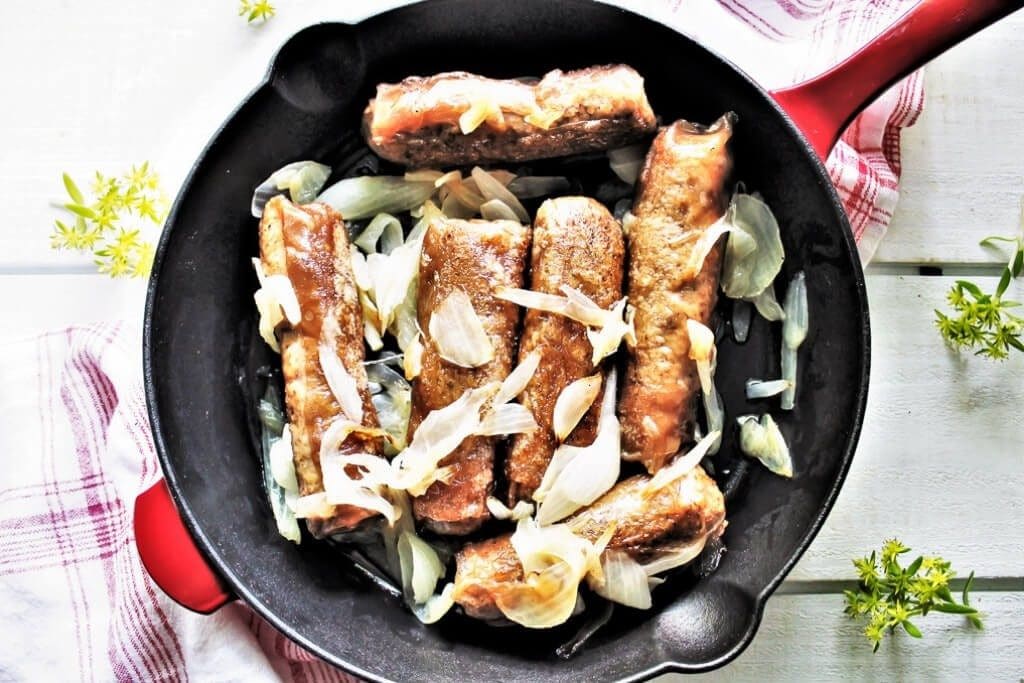 How do I make different types of vegan sausage?

Use the same basic recipe for the sausage filling and simply change the seasonings to make a variety of different vegan sausages.

These are our favorite vegan sausage flavors:

Serve with your favorite pasta dish! Like this oven roasted tomato sauce.

Serve with fried onions and mustard.  (Fry 2 large onions in 1 tbsp. of oil and a sprinkle of salt in an iron skillet on low for 20 minutes stirring occasionally until translucent and slightly browned).  Add to the hot dog roll with the beer brat and top with mustard.  For a gluten-free bun, I use Schar hot dog rolls.

Serve with your favorite vegan breakfast, like my easy vegan scrambled eggs or a chickpea omlette.  These breakfast sausages are always delicious dipped in some maple syrup! 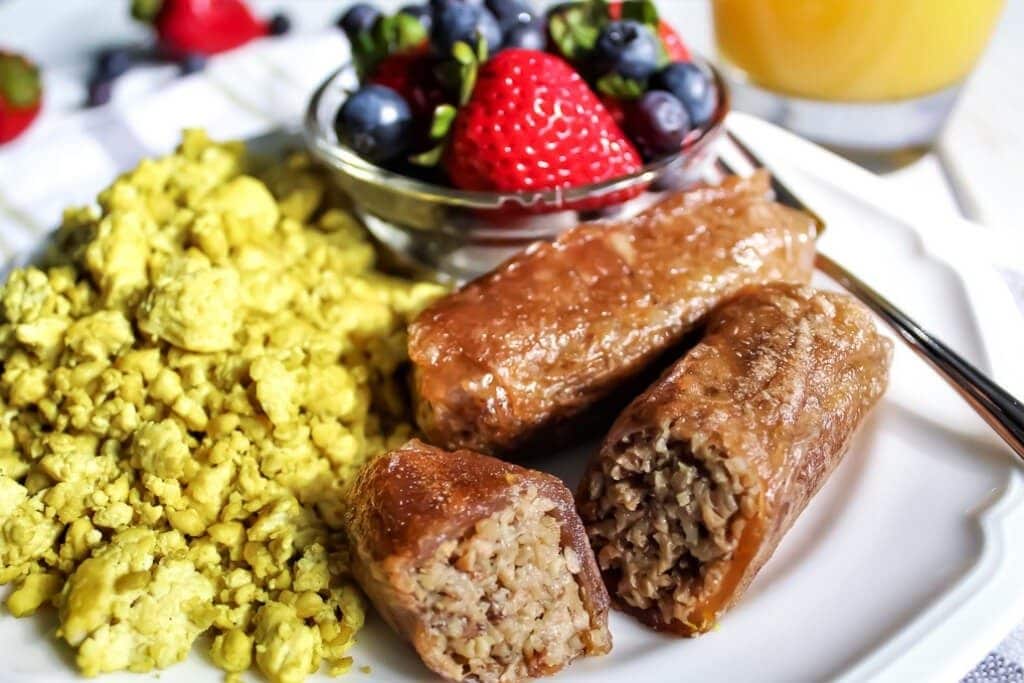 Let me know your favorite!

Don't forget to pin these vegan sausage recipes for later! 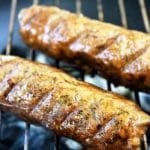 Basic Broth for ALL Sausages:

Sausage Filling for ALL Sausages:

Casing for ALL Sausages:

Wrap the Sausage in the Casing:

We are a participant in the Amazon Services LLC Associates Program, an affiliate advertising program designed to provide a means for us to earn fees by linking to Amazon.com and affiliated sites. View our privacy policy.
23751 shares