This vegan cream of broccoli soup is a rich, creamy, and cheesy soup that gets my kids eating bowl after bowl of broccoli!  Vegan comfort food at its best packed with healthy onions, carrots, and broccoli, yet rich and creamy enough that it feels indulgent!  Simply add some vegan cheese and easily turn it into broccoli cheese soup!

It's one thing that I really missed when going vegan and one of the first things that I had to make it vegan!  I've been making this vegan cream of broccoli for over 20 years now and it's still one of my family's favorite soups!

🥣 Thicken the soup with a Roux

✨ Thicken with the starch method

Note: The starch method is a little easier and has less fat and calories, yet the roux method makes it richer and creamier.

How can I make vegan broccoli cheese soup?

How can I make gluten-free vegan cream of broccoli soup?

You can make a roux using gluten-free flour instead of wheat flour.  Just be sure to use a gluten-free flour mix that does not contain sorghum flour.  When I have tried it using any mixes with sorghum flour, it has had a weird slimy texture.  You can also thicken the soup by mixing 1/3 cup of corn starch or potato starch with 1/2 cup of cold water and then add it to the soup towards the end of cooking.

This recipe makes a large pot of soup (about 8-10 bowls) but everyone goes back for seconds and thirds so my family of 4 usually ends up finishing the whole pot!  If you don’t, no need to worry, like most soups, it is even better the next day for lunch!

Refrigerator: The vegan cream of broccoli soup will keep well in the fridge for 3 - 5 days in a sealed container.

Freezing:  This soup can be stored in the freezer for later, just be sure to use an airtight container or freezer bag and it will keep well up to 3 months in the freezer!

Defrosting: Allow it to thaw in the fridge overnight before reheating.

Reheating: Reheat in the microwave for 3-4 minutes or in a pot on the stovetop until warm. You may want to add a few tablespoons of water if reheating on the stovetop to account for evaporation.

If you love broccoli, be sure to try my Easy Cheesy Vegan Baked Broccoli recipe or my Vegan Broccoli Salad with Cranberries.  Your whole family will love it! 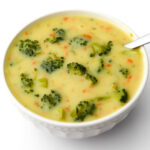 For the starch method of thickening (if not using the roux)

Thicken your soup with a Roux

Or thicken with the starch method

Updated March 10, 2020, from the original post from May 16, 2017 to include new images and more detailed instruction.

We are a participant in the Amazon Services LLC Associates Program, an affiliate advertising program designed to provide a means for us to earn fees by linking to Amazon.com and affiliated sites. View our privacy policy.
9521 shares